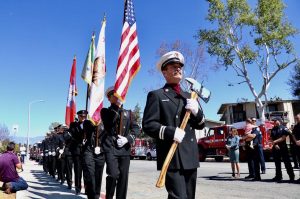 One of the latest additions to the Colton Fire Department is the Honor Guard. Established in March of 2007, this elite unit is trained to perform several tasks for worthy events. In recent years, mainly due to high profile events, fire departments have had the unfortunate task of dealing with Line of Duty Deaths. Firefighters who are killed in the line of duty deserve to be honored, showing their friends and families that they died while performing a service for others. The honors given to the fallen firefighters attest to the brotherhood of the fire service, and prove the saying: “once a firefighter, always a firefighter”. In addition to Line of Duty Deaths, there are retirees who deserve to be honored also. The Honor Guard assumes the duty of working with the family to assist with arranging the funeral.

The Honor Guard also performs at other functions deserving of respect and dignity. These functions include: flag retirement ceremonies, personnel retirement ceremonies, posting of colors at city government events, carrying of colors in parades, in addition to the full honors funerals. The unit has also joined forces with the Colton Police Honor Guard to perform at city functions. They are dedicated to their function and are ready to assume the duties necessary for any special event, making sure that proper etiquette will be followed at all times. 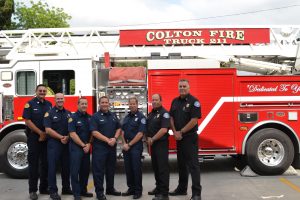 In 2002 the Colton Fire Department participated in the formation of an organization consisting of the area’s shift fire investigators. This group which at the time primarily consisted of the cities of Rialto, San Bernardino, Loma Linda, Redlands and Colton, is dedicated to the hands-on concept of combining and sharing in eachothers expertise and support in the investigation as to the cause and origin of fires within our communities. In addition to the support provided by our neighboring Fire Departments, this group enjoys the participation of the San Bernardino County Sheriff’s Department, San Bernardino County District Attorney’s Office, Alcohol Tobacco and Firearms (ATF), as well as other State and Federal Agencies.